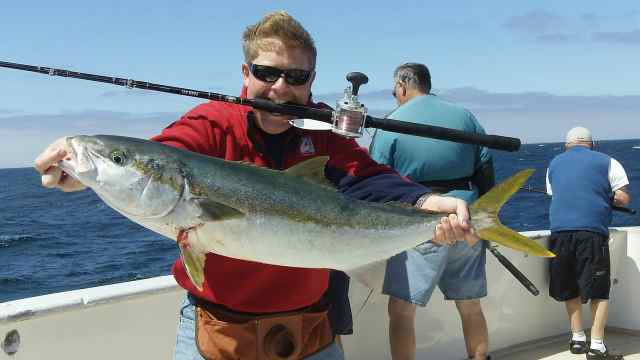 9-23-2013
Bill Roecker
Chris Dunn, Phoenix television weatherman, aka The Flying Weatherman, The Fishing Weatherman and The Voice for Bill Roecker's Standup Fishing DVD series, called Bill as he drove home from San Diego September 20. Chris said he'd been out on a six-day trip with skipper Brian Evans aboard the Spirit of Adventure (a boat he once worked aboard as a deckhand), and that fishing started out tough in bad weather, but improved behind Cedros Island, where the group got all the yellowtail they wanted.

"I got a nice 14-pound halibut there, too," remarked Chris. "My wife will be real happy." Chris wrote of his experience: "The move back to Cedros proved to be fruitful. We found schools of yellowtail that put on a surface show, which always makes for exciting fishing. I caught one on the surface iron (7x). Then, looking to do something a little different, I tried the dropper loop as we drifted into fairly shallow water. No more than 10 seconds after my bait hit bottom I felt the thump, thump, whomp of a fish on! But this one felt a little different. After a short tug of war, I brought aboard a halibut. Just what my wife ordered! Back at the dock, it weighed in at 14 lbs.

"It sure was nice fishing the 'protected' side of the island. Fishing bait and the occasional yellowtail flurry. It seemed the rest of the San Diego long range fleet also had the same idea, ducking out of the weather and taking part in some decent yellowtail fishing. The Searcher, American Angler, Royal Polaris, Excel, Royal Star, Red Rooster III and Independence all ended up in roughly the same area, apparently due to the extended episode of wind in the offshore zone." After leaving the island, the Spirit joined the happy crowd fishing on the yellowfin tuna found by Randy Toussaint at 190 miles, where the free-for-all loaded up most boats with limits of yellowfin tuna. Chris said most of the fish aboard the Spirit were from 20 to 30 pounds, with some larger. The jackpot tuna was about 45 pounds, said Dunn.

Conversation by mobile phone was limited, as Chris had to call back after losing contact while he motored toward Phoenix through the desert. You can hear his melodious enunciations on any of Roecker's DVD series, and on the soon-to-come disc, "Wahoo On The Rocks." That one documents a fine trip aboard the Independence, featuring a couple of bingo stops on skinnies.